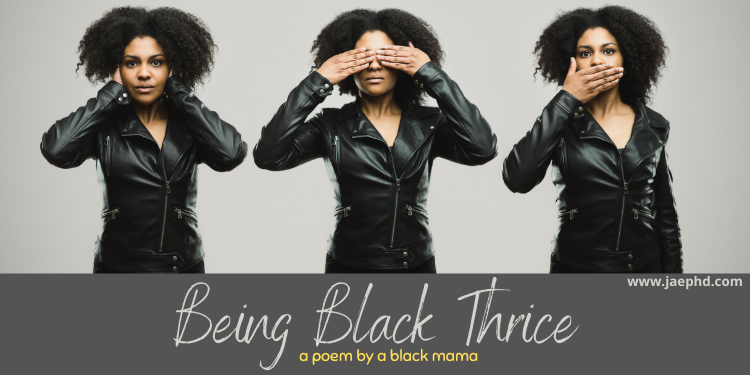 Being a Black woman is like being Black twice.

But, being a Black mama, is like being Black thrice.

The pressure to be a not-so-angry firefly,

A pretty butterfly and one helluva a fierce dragonfly is so heavy.

Not her baby boy. Not my Black son.

The wrath of Elohim on Egypt stirs up in my bones.

Another unarmed Black man did not return home.

Do we hold ’em tighter at night? Teach ’em how to fight?

Or do we give The Talk? Hope the cops let ’em walk?

Damn. Is this our sons’ plight?

Being a Black woman is like being Black twice.

But, being a Black mama is like shooting loaded dice.

I’m tiad of playin’ craps! We stay with a loosing bid.

I used to think those were the days of yore.

Yet just last month a man was kneed til he couldn’t breath no more.

In that dying breath he called out, mama. It slapped us into shell shock.

Discombobulated as we witnessed the 8 minutes and 46 seconds left on his clock.

It’s not enough to just fear his life, I’ve gotta now fear my own.

‘Cause just a few months ago a Black woman was shot in her home.

Her skin looks like mine, our race is the same.

And all we’re left with in memory is Say Her Name!

Say her name, say her name as I hope you never say mine.

Though I return to life as unusual, it is not okay and I am not fine.

They say laughter does a spirit well and I giggled once this week from what I can gauge.

The skit wasn’t meant to be comical; he wanted to bless us by taking the stage.

A tried n’ true escape from this living hell is brought by none other than the Dave Chappelle.

He confessed his cries. The authorities fed us lies. Another Black son dies.

And I? I hurt inside. How many times do we say goodbye? Sigh.

An eye for an eye, no more cheeks left to turn.

These hypocrisies. Bad philosophies. Evil democracies. Just leave us be.

These inconsistencies. Corrupt policies. Deep idolatries. It sickens me.

A tooth for a tooth, a hand for a hand, or is it a knee for a knee?

You can’t beg my forgiveness and I’ll never love workers of iniquity.

But I can spare some advice. Blackness. Black woman.

Black mama. A sometimes woeful trio in this American life.

Because being a Black mama is like being Black thrice.

But this Black mama won’t return murder with playin’ nice.