Knowing The Most: Developing Selfhood in Child-Rearing 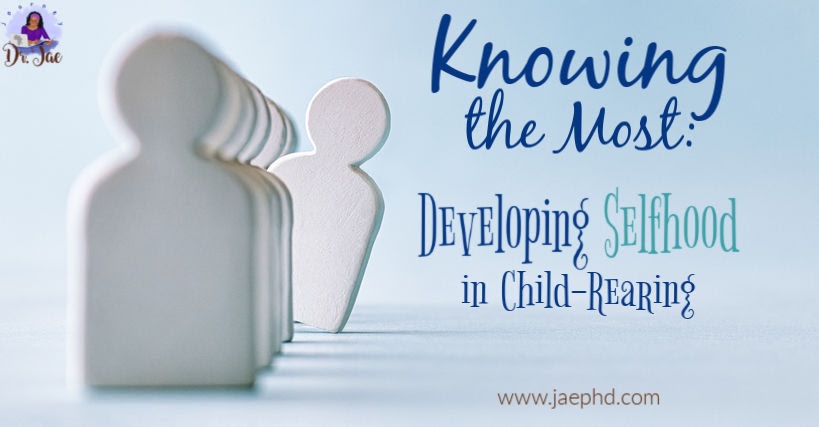 In 14 years of motherhood, I have learned that there is such a thing as “knowing the most.” This is my term to define which areas in personhood and human development it benefits me (as the mama) to know the most about my child(ren).

For the sake of a whole-child approach, one identity is not more important than the other, however depending on where the child is in his maturation (self and human) it can be more advantageous to understand identity more intentionally or more effective to timely develop certain identities with more attention and care.

Meeting the needs of growing humans, understanding who they are as their own people, and where they are in their development becomes more complex as they age.

So complex that I have learned that I cannot be all things at all times in the most-needed way. This understanding causes me to focus on the most important matters to work on now. When I am outlining my parenting strategies and plans for my youngest son, I have some prior knowledge to assist me. (If you’re a parent, you know the emphasis on some is necessary because no child is the same.) Yet, when I consider my oldest son there is no parental history. Each time my firstborn turns a new age or has a new experience, I am re-learning all over again. At his age, new experiences happen so often that I am constantly adjusting and calibrating. It is so much change that it has often left me asking – what is the mainstay here? What can I focus on as a bedrock where the speed of change is slower?

It would take an exhaustive (and maybe even an impossible) list to note the different identities that humans express, not to mention the sub-areas related within. Humans (and even more so growing adolescents) are too layered and too complex to understand all their parts. I won’t tire you but for example’s sake, let’s take a look:

To that end, my leading questions persist.

Knowing the Most at 11

At 11, I concentrate on knowing the most about who my son is becoming. There is so much identity work in this stage of development that this is what I care about the most. When he tells me likes a person, I want to know why. Not to pass my judgment, but to understand the identity that is manifesting within that attraction. This is also true for anything he tells me that he likes: be it haircuts, sneakers, music, the way he is spoken to, his responses to my actions, his take about what’s going on in the world, etc. And of course, this is also applicable for the things that he tells me he does not like.

I take inventory as he reports his likes and dislikes and why. There are some things that have not shifted, though. There are some “fixed” things that I recognize from infancy. The mainstay is who he is becoming. This process in his development is at least three years long. My most-important tasks are collecting data from him through observation, asking questions, and being fully available to him when he wants to talk to me as well as analyzing this data for inconsistencies, moral strength, and individuality so that I can make adjustments with him and for him and pose questions for him to consider about his own identity, reality, integrity, and behavior. This stage of development is difficult because it is unknown, and we are figuring it out real-time; but it is also easy in that the child literally feeds you what you need to work with.

Knowing the Most at 14

Lots of what I mentioned above is still true for my oldest, it’s just not sitting at the core desperately gathering to be crafted into something it can recognize and settle as “this is me.” Instead, it’s a lot of biology and energy that appears and duplicates at a faster-than-lightning speed into a newly-formed (and still forming) identity that wants to “get out” by expressing itself but does not quite know how to yet. In my mothering, this is the key difference between a pre-pubescent and a pubescent child.

My youngest is forming his identity “from scratch” while my oldest has some knowing of his, but is beginning to learn how to express it.

At 14, I concentrate on knowing the most in understanding my son’s self-expression, perceptions, internalization. Remember the thread I spoke of earlier? It gets real here! Not only do we express who we are at different times for different reasons with different people, we must also be aware of when it is appropriate to let who see what and for what reason. To date, it is the most mentally and emotionally fatiguing work I have ever performed. I teach various lessons in distillation, discernment, appropriateness, and acceptance, supporting my teenager in understanding and managing his sense of self while helping him to consider the feedback he is likely to receive from others as a result. He does not need the knowledge of said feedback to change himself but to account for it while he occupies his space in this world. He spends less of his time telling me what he likes and does not like (in comparison), but instead spends his time narrating stories.

Most of these stories are a retell of his present-day events. Sometimes, these are tellings of his future self as he is excited to age in his teen-hood to attend high school and college, drive, and travel.  Other times, he shares childhood anecdotes to ask me “why” and “what” questions as he makes connections from his former self to his present self and those of others. In these storytellings, he mainly focuses on how others expressed themselves and his critique of it and how he expressed himself (or tried to) and how well (or not) that landed. The mainstay is his self-expression and current worldview. This process of development lasts … I don’t know how long from maternal experience. I have never raised a teenager before him. But I have taught many teenagers and though it is not quite the same, it is better than no experience. So, I would guesstimate approximately 4-6 years long.

My most-important tasks are collecting data (same measures previously mentioned) and weighing it to develop and secure his emotional and mental health. Our emotions and mental fortitude are tender and fragile as teenagers and someone should be present to help us stabilize and communicate our emotions and thoughts as a part of our selfhood. This stage of development is difficult because it requires that the parent has already learned this for their-self, and it requires seeing (and approaching) that teenager as someone else other than just “your child.” A keen understanding that his world takes up more territory than only his parents’ domain is crucial. But it is also easy in that this tends to be the most well-remembered period of childhood. Personally, I remember being a teenager much more than I remember being 8. I can relate very well to most of what my teenager is experiencing. Apart from our gender difference and some personality variances, there really isn’t a thing in his current development sequence that I do not understand. It feels very familiar and I use that to my advantage.

As an educator, I claim that academics, recreation, and arts are very important. Spending time teaching, exposing, and connecting with children in these areas (and more) is beneficial. However, I would caution a parent not to forsake selfhood at the expense of these items either. As a college instructor, one of my greatest woes is working with students who know how to earn the A or throw the ball or play the instrument; but is struggling to understand who he is and how to express that. Too many of them have identities in who their parents told them to be or in what they have (seemingly) accomplished or no identity at all. In short, there is a season where developing a child’s academic-self is more weighty, but I am not sure that in adolescence academics is THE most important thing to understand about a child.

We are all trying to figure it out. I do not claim to be an expert in 14 short years. I do aim to share what I have learned and am learning.

One helpful resource I have used to assist me in these processes has been the Safety Plan by the Hawaii State Health Department. So far, I have only used the first page, but there are three in total. Use what works for you! Also, I have not used this plan (and probably would not) on a child less than 11 years old. For ages 11-13, it is useful though it takes some adult guidance. May it be well with you.