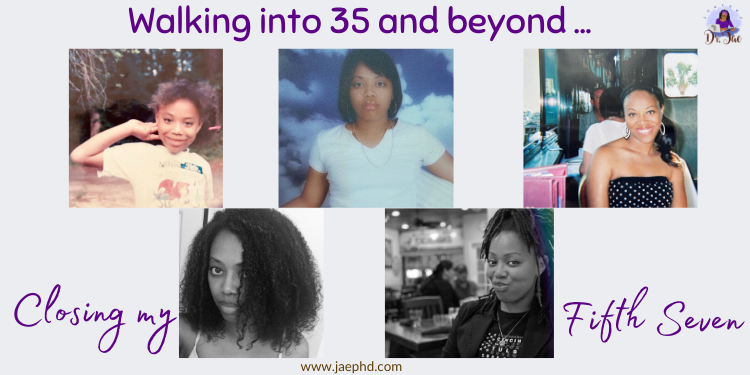 Everything in time (and by extension, in life) moves in cycles. Seconds, minutes, hours, days, months, years, all add up to become part of a cycle. Some cycles move very quickly like our beating hearts or a bolt of lightning while others move very slowly like the return of a Haley’s comet or a millennium. This post centers your attention on one number, one cycle that has captivated humans since the beginning of the time. The number 7. Seven years.

Seven-year cycles are extremely important to doctors, educators, social scientists, and psychiatrists. These professions mainly work with human development in their various stages and have reason to study our behaviors, thoughts, patterns, and ways of being across our lifespan. I noticed something different about myself not much after my 21st birthday, and began to study cycles of seven. It just so happened that I had began to work as an educator with mainly junior high students who were turning 14, I was full of child development studies as a psychology undergrad, and knew the value and importance of turning 7 years old. I began to recognize a pattern—humans experience a shift in their seventh year.

The number 7 is important across many cultures, many beliefs, and many eras. Even for those of us who not see numbers much, it is hard to ignore the beauty—or the magic in the number 7.

To name a few:

The number 7 also represents some satisfaction of completion. To name a few:

My entire life I have heard that this number means “complete.” In my experience, I would add to it. The number 7 also carries the idea of “the end.” Not as a finale, but as a transition—the end of a beginning and the beginning of an end where after that transition there is no more (at least not exactly) of what it was before. Because of my time serving as both a mother and an educator, I dabble more into the psychology and physiology of the “magic” in the number 7. It is my responsibility and my job to “know humans” and more specifically how they evolve, mature, and develop. In my efforts, I have come to appreciate the transitioning and evolving power of the number 7.

To name a few:

The body appears to operate on a 7-year cycle. I did not notice my first 7-year cycle (though I have noticed it in my own children). I faintly noticed my second 7-year cycle from 14-21 years old; but vividly remember my third and fourth 7-year cycles as I matured from 21 to 28 and again from 28 to now 35. (Even our taste buds change every 7 years or so. I have surely noticed this one!) This afternoon, is the beginning of the ending to my Fifth Seven. The seventh year is a transition year from one cycle to the other to prepare me to enter my Sixth Seven, the season from 35 to 42. This year, this age, is a shift where apparently (as Rudolf Steiner would describe it) I continue more soul work moving from my intellectual self to a higher state of consciousness. From 28 to 35 years old, we tend to experience a creative phase where our emotions become subtle, we peak in our careers, and we better understand and realize who we are and which characters have been forced onto us by family, peers, and society. This is also the time where we draw the line in the sand on how much of that we will adopt and how much of it we will define on our own terms.

Growth in my Fifth Seven

True to form, in this cycle, I advanced my career, my writing style, and my relationships. To Steiner’s point, my intellectual self greatly peaked. I had a desire to know more—my inquiry advanced, my research skills improved, my self-assuredness settled. (The last impresses me the most as I remember my 14-to-28-year-old forming, developing, and securing my self-awareness. I guess it stands to reason that assuredness would follow awareness. Even today, I support my own 14-year-old son in forming his own self-awareness.)

In my Fifth Seven, I discarded the religious rhetoric over locs right along with the unprofessional view of them in “corporate America.” I have never felt more free and attractive with a hair decision than I did when I decided to loc my hair. I have colored them in hues of purples, pinks, greens, and blues. The Lord still answers my prayers and I have been offered many positions in my career. The potency of my feminine power drastically increased and I learned how to employ it. I visited Mama Africa for the first time. I earned my master’s degree in education. I canned a 13-year-old marriage. I moved to a new city (the fifth time in my lifetime). I learned a new language. I adopted and created new mantras and orders to live my life by (with much success). In a conversation with my partner about feminism I stated, “I am not a feminist. I am just not down with the patriarchy.” And he told me that was quote-able, and I wanted to include it because I have spent the past seven years wrestling with many American social issues and remixing my conditionings. I revisited my positions on race, class, children, romance, justice (and forgiveness), religion, politics and economics. It was an engaging, evolving, eclectic experience. It was an eye-opening seven years.

P.S. There is something interesting about the year 33 in the time period from 28 to 35. I cannot exactly put my finger on it, but there is something. If you are approaching this age, be present and be aware. There is a certain self-evolution here that I cannot articulate, but you can catch it if you are paying attention. While the number 7 has its own punch, the number 3 is pretty magical too. I am not sure that each human experiences the “Evolution of 33”, but just in case you are one of thoses who will; be alert.

Happy Matrix Day to Me!

It could all be myth. I could all be science. Whoever really knows? What I do know is even though myths may not in and of themselves be completely accurate, the spirit of their existence usually has some credence. I also know that science is not always “right” either. I am not married to science (though I value it) and I am not turned off just because someone shouts myth (though I peer into it). In my lifetime, I have witnessed the reality of seven-year cycles. And so, I welcome the “new me” who is transitioning at 35 and to walk into this seven through 42. On this day (35 years ago), the Creator called me forth from my mother’s matrix into this time-space reality. On this day, this time-space reality transitions me from my Fifth Seven. Selah.