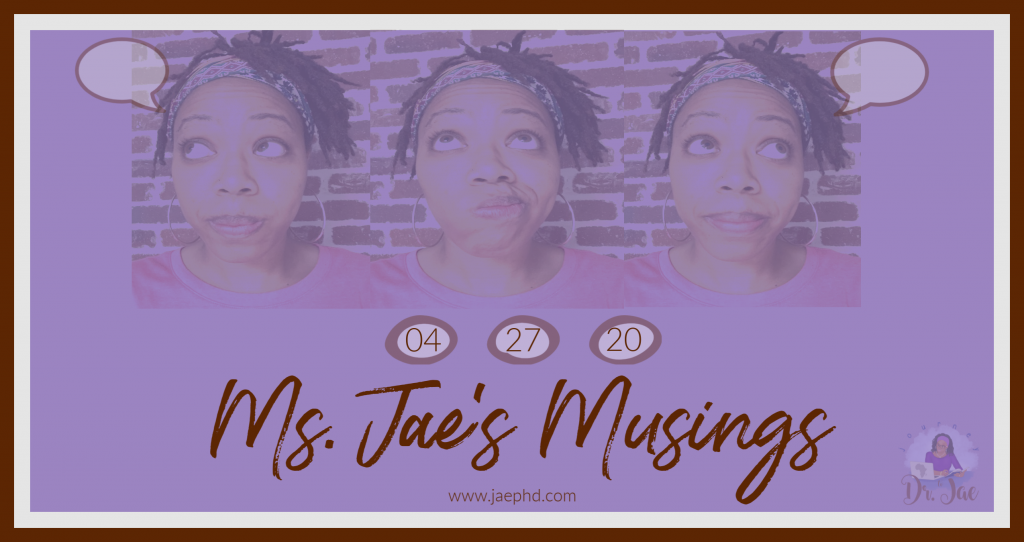 There is my female soulmate’s Earthday.

And at some point this week, I move into my new apartment.

These are my top ten (shareable) thoughts in this week’s rhapsody of Miss Jae’s Musings:

1. The Best You. I know we are only 4.9 months in, but The Last Dance may be the best docu-series of the decade. It is captivating.

Phil Jackson—#nosaddlesonmustangs I focks with you.

Okay, that’s all before I gazed a stare on Salley’s lips.

Did y’all see that man’s lips?

I forgot I was a basketball fan at that point and only remembered that I am w-o-m-a-n. No, wait. One thing made it past Salley’s lips.

Rodman taught me that you do not have to necessarily be #1 of all (though, nice); you just have to be #1 at what you do. He gave zero f*ucks about being “number 3” on the overall team and he only cared about being the best defensive player and scoring rebounds. And he shined there. There was a seat for all 3 men at the table, and they were all the best at what they did. Sway.

2. The “Radio.” Listen. Snoh Allegra betta’ gon’ ‘head with her bad self because her latest hits are all I can play on the “radio” right now. I am not a wedding-girl AT ALL; but this chick makes me wanna plan one just so I can dance to Find Someone Like You in a pretty dress with a man who loves me in front of folk. Wait. I can do that without a wedding. Nix the wedding. But, maybe, just maybe, I can find someone to sing this to me in Español. Any takers? If you do not know this song. Go, play it now. But, come back to this post, mkay?

3. Motherhood. I need to decide how I want to approach money and teenagers. Most times, my teenage son spends his time earning his money; but occasionally, I just give him cash. Now, I wonder how far do you go with telling someone how to spend their money—because once it’s been earned or freely given, it’s really not your money anymore. Do you place $40 in your son’s hand and then say, “It yours. But you can’t buy fast food or video game.” Eh. Not sure. I’m not talking about purchasing things that are already out of the question as the rules of the house give way. These are simply ordinary things that you do not like to spend your money, but again, it is not longer yours once it leaves your hand. Umm…what y’all think?

4. Black -Ships. I read a host of social media comments written by Black women who were all conversing about their relationship ills with Black men; and all I could think about was how much I did not identify with their struggles. I happen to think there is a difference between someone who “did you wrong” (it does happen) and someone who attracts “bad men.” In most cases, it was the latter. And in that instance, Sis, elevate yourself to attract higher. There is a popular saying that goes a lil’ sumn like—what I require, I provide. You cannot come to any -ship (add whatever you want in front) with the sole mission of what-can-you-do-for-me? I mean, you can. But, then you attract that. So, both of y’all only want the other one to meet each other needs. Sounds like a disaster. See?

5. Television. I finished Ozark. On the record, I have never witnessed such awkward and uncomfortable on-screen romances and intimacies. Absolutely no one on this show looks f*ckable and these bizarre-ass sex scenes agonizingly scream this truth. Geez.

Moving on, I knew Helen would get murked, and I knew Nelson wouldn’t say nuffin’. Why would he? Last week, I mentioned that was my favorite character was dead. My second-favorite is still standing strong though Darlene is coming up right behind her. I am beyond ready for the plot to reveal what the Snells have on the Sheriff, and what is really up with Agent Maya. Y’all see how they added a Black woman to the show to give it a lil’ spice? #jussayin

6. Music. Alicia Keys’ “Good Job.” Y’all…can we talk about it? The content is important and meaningful and that is what I *think* people mean when they say it is a “good song.” And for that reason, okay. But, the song really isn’t that good. It is forgettable and sleepy. Unless catchy or emphatic, I am not fond of hooks that loop the same wording. I am a former English teacher and we know there is a difference between repetition and redundancy. This hook was uber redundant and I was bored. I enjoyed the authenticity in her voice, though. Her voice quality is deeply rich and raw. And, I just forgot about this song. Next.

7. Professor Lady. This was the last week of class. I am going to miss my babies (who are actually 18-22) for the summer. I’ve already been invited back to teach for the 2020-2021 school year, so that’s a win; but I wonder if I will teach on-campus or virtually next semester. What y’all think?

8. Just Me. Titles aren’t necessarily everything; but definition surely is. I am thinking about writing a post titled, “I don’t wanna husband, I wanna partner.” (Would you wanna read sumn’ like that?) I’ve tried both now, and partnership is much better. So much better. No, like frfr better. I have learned that partners can be husbands, but husbands are seldom partners. Sigh.

9. GRE. I did it! It was not a cakewalk, but it wasn’t as difficult as I had imagined it to be either. To my surprise, the GRE populated my scores as soon as I submitted my final section. I did not shine, but I did NOT bomb either, and I am okay with that. #lookatmenow Seriously, though. We should cancel this exam. It’s not the wisest way to spend $205 or the best way to spend 4 hours; neither is it a valid indicator of graduate school success. Soooo, yeah. I’ll run my mouth more on this later.

10. Quarantine. Are y’all at least getting out of the house for some fresh air and exercise? I love a brisk walk; and this week I strolled up to D.C.’s Capitol building. On my way, I saw this funky lil’ butterfly art littered with positive and familiar words, and snapped a pic. I didn’t take my mask off, though. Because as soon as you do that’s when someone walks by and sneezes, leaving their respiratory droplets in my breathing space. Nope.