The Simple Math of Provision and Multiplication 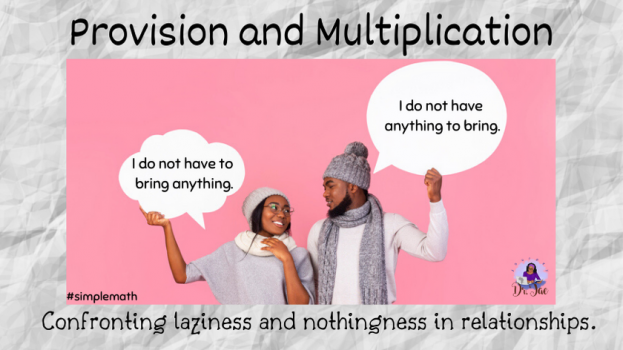 The amount (and degree) of “relationship” laziness I have witnessed lately is insanely alarming. It baffles me how many adults actually desire to approach partnership with nothingness. In my latest encounter with (what I call) The Foolishness, I visited a certain online space where women were sharing their thoughts on a particular relationship matter. Unfortunately, most of what was shared was not helpful or fitting. Then, they WENT IN on the man in question. As the conversation continued, commenters began to overshare their own relationship woes and I was left flabbergasted at how certain men had responded to them in their previous unions. The laziness on both sides is out of hand! 🤯

For the record, I make a habit to not address men…unless I am making a statement about womanhood. This post addresses both. Because, I cannot understand why some think it best to approach relationships with this lazy, lackadaisical attitude; and then have the effrontery to cry-the-blues about why their relationships are unfulfilling, failing, or nonexistent. 😬

I am noticing that (some) women find it acceptable to “come to the table” with nothing and that (some) men find it respectable to offer absolutely nothing at said table. I cannot make this up. Weeks ago, I read a post by a man that suggested he did not have to do anything but show up to the “table” AND days ago, I read a comment by a woman who implied she was the “table.” Let’s toss to the side that both of them (at different times) later expressed their desire to have a relationship. 🙃 {S/N: Seems as if some people want to HAVE a relationship but not BE in a relationship, aaaaaand that’s a different post for a different day!}

What happens when two adults who desire relationship (at least in some way) possess the mindset of – all I have to do is show up? Showing up is an important step. But, this is where the WORK begins, not ends. 💪🏾

Ladies, a quick word, please? If you call yourself or compare yourself to an inanimate object (that is something to be owned, a piece of property), do not be surprised if you are responded to as such. #iamnotatable

Upon further survey, it appears that the women who bark that they do not have to do anything are the ones who also have no man (and are bitter about it). 😩 Then, men who offer little-to-nothing may have one specific need being met, but are unfulfilled and dissatisfied at-large. Simple math informs us that input equals output. There’s a number of people desiring relationships with a lazy-ass attitude and are actually clueless as to why they do not have one or have a raggedy one. 😑

To make matters worse, somehow the Bible is used out of context to support or defend emotional pain or undesired social/marital status. In my experience, men have not spewed Scriptures and Bible passages either at me, other men, or across the Internet in response to the pain of broken or absent relationships, but women have. That statement alone is more than telling. Hope y’all caught that one. Most of the time these are religious women who have been improperly taught key Biblical stories with a distorted view of “finding a husband.” {Then, later in the conversation these same women will declare that they do not have to find a husband, that man will find them, oblivious to the inconsistency that rests in their logic emotion.} 🤫

Here’s the gag on relationship laziness:

If you are lazy or if you gain a lazy partner you still GET NOTHING!

Assess how they increase, and if they even want to. Do they want to multiply what you have produced?

Evaluate their provision. Have they produced something for you to multiply?

Men: Do not give your means to a woman who cannot or will not multiply it/you.

Women: You cannot multiply nothing; so avoid forcing an equation that does not work.

We are intended to CO-LABOR in partnership(s). If you cannot add to a unit, you’re not ready for it, and neither are you qualified to be a part of it.

It is that simple. Since we live in an era of “I’m judging”, please use all the mental faculties the Good Lord has given (you) to judge and discern the quality of a man or woman. It’s strange how social media posts can end with #imjudging when it comes to trivial matters like a celebrity’s apparel choice or a politician’s platform; but lack the same ability to judge when it comes to who (you) allow to access (your) mind, heart, body, and money. How, sway?

I am no Bible thumper, but I cannot sign off before I confront poor preaching and contextual application.

Y’all, please stop preaching laziness. There are too many people, namely women, who love to claim Proverbs 31 and do not possess a fraction of that woman’s skill set. How ironic that those with the laziest relationship mindset would cling to a woman’s story that boasts of hard work and labor. Again, oblivious to the inconsistency that rests in their logic emotion. 🤫

I swayed back-and-forth on whether to confront the Genesis narrative or story of Ruth & Boaz. I decided on the latter because (in my experience) it is used more frequently, and it is definitely a story that religious women interject in conversation to support their nothingness. To clear any misunderstanding, Ruth did not practice nothingness. It is jaw-dropping how any reader could conclude that Ruth did nothing but be. Did we read? #ironicinconsistencies 😑

If no one has informed you yet, the Woman of Valor nor Ruth & Boaz are prescriptions for romantic relationships. These stories are not told for the sake of “finding a husband.” But, when we approach these stories to understand the WORK (the provision AND multiplication) involved with building families and communities there may just be a gem or two. 😉

I have received a number of social media comments or messages by some women who are equally frustrated with this laziness. Some of them even ask how do they “get around” these Biblical examples in conversations with other women about relationships. There is not much to “get around;” but be mindful of who you allow to speak into you. Judge whether someone is worthy (or not) to speak on these matters. 🧐

Women (from me to you): The next woman who chimes in with Boaz or Proverbs 31 (in the context of this post), inquire about HER man. 😳

Assuming she has a man, evaluate the strength of provision and multiplication in that unit and of that house.

If not, refuse her ability to impart anything into you. In other words, KEEP IT MOVING. ✌🏾

I started this article with the notion of simple math. I will end the matter on the same.

In the event that both parties offer nothing – 0 x 0 is STILL ZERO.

This framework only PRODUCES more than zero when BOTH parties bring something to the “table.”

This is simple and yet it is still missed…A LOT. And especially by folk who swear they “know.”

You can approach relationships with nothingness and laziness if you like, but then that’s exactly what you will attract and manifest. It’s on you.