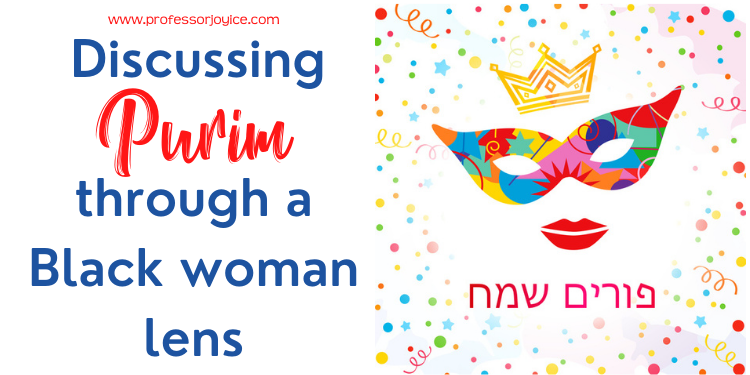 A few months ago, I wrote about a festival named Hanukah. During that time the Hebrews were under Grecian rule. Before, the Hebrews (namely Judeans) were in Persian territory under the leadership of Xerxes I (Ahasuerus). Then, the Persian empire extended from India to Ethiopia. [I should not even have to say this, but to be clear, these were not “white people.”] During this time, a Judean woman named Hadassah (also called Esther) from the Tribe of Benjamin makes history leaving us to commemorate her faith, her service, and her power even today. The events recorded in the Scroll of Esther fold into a salvation celebration that now call Purim. [The word for “lot” in Hebrew is pur and its plural form, “lots”, translates as Purim. The term comes a practice called casting lots that Haman, the story’s nemesis, employed to determine the day he would plan to execute God’s people.] In 2021, Purim begins the evening of 25 February.

Esther is the last of the five festal scrolls in the Hebrew Bible. I marvel at its inclusion in the canon. In Biblical scholarship, this historical novella caused quite the stir as no other book in the Hebrew Bible has received such mixed reviews. The story does not mention God, basic Torah law and practices were not present, (later it was added), and there is bloodthirsty language against God’s chosen. Also, Esther is married to a non-Israelite. Yikes!

Truly, these notions are a thorn in the side to Hebrews because it leaves the question: Where is God and where is the Law? Likewise, this scroll causes the same thorny side for Christians because it makes it difficult to boast of the “infallible” and “inerrant” word of God. In fact, Martin Luther, Protestant reformer, wished it had never been written. Even if you settled these, there is a lot of happenstance in this story that is too obvious to overlook. Yet, many of us accept today’s canon as-is so let us continue.

Most are familiar with this story, so instead of summarizing its events I want to explain why this story matters to me as a Black person and as a woman. Throughout history, Black women have stood out. Despite the fact that we have had to work through a double oppression, like hopes springing high, we rise! I do not know what it is like to be anything else but Black; and in that it seems as if we are the most oppressed group on the planet. That’s not to say that other groups have not been marginalized but it is to point that out …probably not like Black folk.

If there is any one book by which the majority (if not all, at least at one point) of Black people can find themselves in, in the name of our struggle, it is the Bible. Historical literature is filled with comparisons to the Israelites and the Promised Land, while our historical leaders are often called a type of Moses or Judah or messiah. It is quite interesting to note that of all the people in the Earth, the leading group with stark comparisons and similarities to the Biblical people are also Black people.

Can I be honest? I am not always 100% sure what that means. But, I do know that when I look back over the history of my People, this reality is striking, and maybe even telling. Just maybe. I do not like to make claims that I cannot defend; yet, I also cannot deny trends and patterns right before my very eyes. So, you know, balance.

As I re-read the Scroll of Esther in this Purim season, I notice my connection to it as a Black person. In this story, there are a group of people living under the rule of another as a result of exile and dispersion. Yes, that is indeed familiar. And for more ancient historical background, this was the second major exile of Israel (behind Egypt).

There is a plan to completely wipe out all the Judeans in Persian provinces. Do you all understand this? This is an intentional, strategic, and political (maybe even militaristic) attack to murder man, woman, and child! Yes, even women and children. I know there is a time for everything. Even a time for peace and a time for war, but my word! Unfortunately, this is indeed familiar too.

One virtue I love about my People is that we tend to accept the “designated” person among us to help free or represent us. I am not asserting that there has not been any patriarchal or parental oppression, but I am shedding light on the fact that we raise up man, woman, or child if we believe they are the chosen or deserving person for us. Not that Sojourner Truth or Mama Moses did not receive any slack, but they were supported leaders among our own. King, Hampton, Ali and more were in their mere teens as they began their path to leadership. While every single Black person may not have been board, at least enough of us had to support them considering their success. Point is, Black people do not need for their “hero” to come in the package of a seasoned, established, and educated male. A woman. A youth. A child. A regular. Even a “mixed” person is a-okay. If you got it, you got it. And Hadassah–she had it!

We Don’t Die (Out As A People)

The story ends in celebration that they did not die—that it was not possible for them to be utterly destroyed. Despite their enemy’s attempt to take them out, it failed. Well, damn. That sounds all too familiar as well. In the words of Antoine Fisher, “I’m [We’re] still standing, I’m [We’re] still strong.” From chattel slavery to Jim Crow to Civil Rights to the Crack Epidemic to the school-to-prison pipeline to police brutality to Black Lives Matter, we are still here. A gospel song comes to mind, “If it had not been for the Lord on my [our] side, where would I [we] be?” It must be God, right?

Speaking of slavery, let’s take a deeper look into Esther 7: 3b-4:

…Let my life be given me at my petition, and my people at my request; or we are sold, I and my people, to be destroyed, to be slain, and to perish. But if we had been sold for bondmen and bondwomen, I had held my peace, for the adversary is not worthy that the king be endamaged.

Her request always give me chills! In a petition to her royal husband, she confesses that her people have been sold to be destroyed, to be slain, and to perish. Then the focus shifts to their enslavement. She basically says that if their enemy only wanted to sale them for slaves, they could have managed (as the Hebrews have survived that). But, a complete annihilation?—nawl, that’s just tew murch! Haman is toe-ing the line and the queen cannot have it. And, of course they live. The complete salvation of a nation rested on the plea of a woman. Come through, sis! I do not know if Esther was a ‘Black woman’ but at this point I imagine its possibility.

A Heart For The People

In Esther 8:6, I am in awe of the queen’s heart for her people, and it is so womanly (in my opinion):

She just gives me such Black-girl feels. Thank you, Queen Esther.

In Genesis 37 & 44, we find similar language (best understood in Hebrew) from Judah concerning his own brothers. (But is it okay, it is faintly present in English.) This idea that slavery is one thing, but death is too far! Genesis 37: 26-27:

And Judah said unto his brethren: What profit is it if we slay our brother and conceal his blood? Come, let us sell him to the Ishmaelites, and let not our hand be upon him for his is our brother, our flesh. And his brethren harkened into him.

S/N: Shout out to my West Indian brothers and sisters. Anytime, I hear the word ‘brethren’, I think of you all!

Finally, Esther saves the day and her people, and the inauguration of Purim Festival is established beginning with her fast. Esther’s fast served as her stance of solidarity with her own people. It was a true F.U.B.U. moment. Guess what? Queen Esther is the only woman in the Hebrew Bible credited with authorizing a cultural observance. Go, girl!

Her fast is also the point in the story in which the events begin to change in favor of her people. It is important to note that Purim focuses more on the day of their relief, not just the day of their triumph. Purim is a two-day celebration in which observers fast and pray on the first day to remember the sorrow, and celebrate on the second day to remember the joy. Sweet redemption. Redemption song.