What Is Casting Lots? 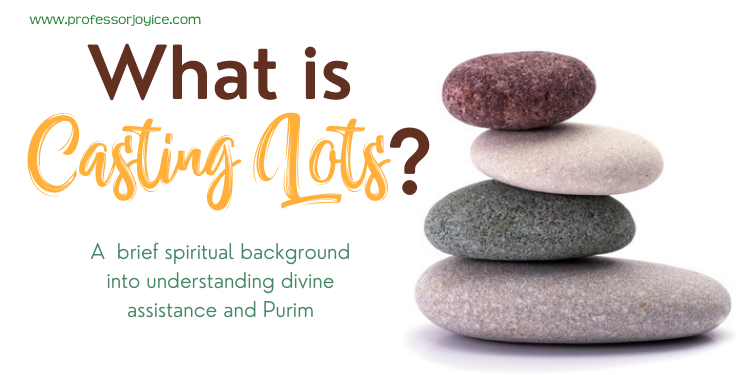 This article is written to provide a connection to Haman, a Biblical character in the Scroll of Esther, to encourage further literary and historical analysis of Purim. Haman casts lots to decide on the day to annihilate the then-Judeans. His method is interesting and deserving of inquiry. But first, we must learn what is “casting lots.” Why?

Because, when Haman planned his massacre against God’s people the day chosen by way of his casted lots. The narrator does not reveal the date—we learn of the date from Haman’s letter. We only know that the lot falls on the twelfth month—the furthest possible month out as Haman casted in the first month {Esther 3:7}—focusing readers’ attention to the process of casting than the actual date itself.  (The word for “lot” in Hebrew is pur, and the word for “lots” is purim which is also the name of the Biblical festival observed on the 14th and 15th day of the 12th month.)

The Scriptures bear several examples of divine intervention—the occurrence of what the Israelites believed to be the Most High communicating to them (for various reasons): prayer, acts of god, jumping threshing floors, manifestations, visiting mountaintops, and today’s topic—casting lots. Perhaps the most popular act of “casting lots” in the Hebrew Bible is the Urim (oo-reem) and Thummim (thew-meem) first mentioned in Exodus 28. Apparently, these were two objects (likely stones, bones, or jewels) that served as a way of receiving revelation from YHWH. What we do know is that casted lots revealed the perceived answer to an either-or, yes-no, or true-false question/solution.

Casting lots was (and is) a way of leaving a matter a chance, but not necessarily random chance. Spiritually speaking, lots are cast in surrender of our mortal influence and in exchange for a divine-influenced “boost” towards the “right” answer. The first key is to ask the right question(s). However, to know the right question(s) you, the mortal being, have to do your own work. Then, there comes “the point.” The point when you have done all that you can and a final decision must be made. Many of us feel that inexplicable feeling to just “let it go” and “put it in God’s hands.” (Note: Choosing this path BEFORE you do your work is not what I am talking about.)

Casting lots is a practice of faith too. We cast our lots with the Creator in faith and in confidence that our Power will respond and relate to us. We are intelligent enough to help ourselves (understanding that it does not minimize the Creator), but also we are humble enough to ask the Creator for partnership. Seriously, why should the Most High bother if we do not? But when we do invest in our abilities, put in that work, and ask for divine partnership, it is our way of saying: “God, come through. I know you won’t leave me on ‘read.”’

Remember the Donnie McClurkin gospel song, “After you’ve done all you can, you just stand”? I am not sure if there is any Biblical precedence on “standing” once we come to our “done all you can” moments; but one could certainly make an argument for casting. After you’ve done all you can, you just cast. Maybe this direction is a bit more practical and more action-oriented (like flipping a coin today and predetermining your chance—heads or tails—before the revelation) and it is certainly more Biblically sound. The second key is to not interfere, leave your secular influence out of it. Once you cast, the lot is set.

Sometimes, this feeling is born out of relationship. We want to include the Creator in our plans and decisions because we want to connect with the Divine, and casting lots helps to fulfil this desire. In other times, this feeling is born in responsibility—or rather our need to not absorb all the responsibility. We understand that we want the Most High’s assistance in our life, so with what power and free will we do have, we invite the Divine to help unload some of the decision-making burden and join us in its process. Regarding the Urim and Thummim, maybe the objects lit up in patterns to reveal the answer or message or perhaps these objects were engraved with characters identifying “yes” and “no.” Outside of the Urim and Thummim, other examples of casting lots lends itself more toward the latter. Also, the engraving or characters upon stones (or any object, really) is a method we can still use today.

The third key is to cast upon the land—the earth. The “divine” aspect is believed to be inspired by being in nature and casting your intent and your question into or upon the natural ground, (or inside of the Temple). In our modern world, though, we are left to cast outside as the Temple has yet to be restored. In my own belief, my saying is “If God is anywhere, it’s outside in nature.” Note: These beliefs are not only limited to the Biblical narrative. Casting lots upon the earth has roots in Arabic traditions, West African spirituality (ifa and fa), and in Madagascan practices (sikidy).

Back to Haman and Purim. Why would he choose to cast lots for this particular decision against the chosen people? Seems like some sort of sick spiritual and psychological warfare that he enjoyed imposing on God’s people. For months, they were left to feel downtrodden and distressed concerning what seemed like their ultimate end. He left their fate to chance in an effort to use that psychological reality to torment them.

The story of Purim has many lessons. In terms of casting lots, one lesson to glean is that we cannot outsmart the Creator and that using ‘good’ (a spiritual practice) for ‘evil’ (murder) is probably not the best idea. Casting lots is a sacred practice to invite the Divine into your life and not a means of determining ill (upon innocent people). Haman seems to be a cautionary tale for anyone who dares to seek divine assistance for unrighteous activity. In the end, the lot fell upon Haman—and what a full-circle moment! It also is reminiscent of the popular remark declared by Yosef to his brothers: “As for you, you meant evil against me, but YHWH meant it for good, to bring it about that many people should be kept alive, as they are today.” {Genesis 50:20}

Today, we continue to celebrate the salvation of these Ancient Judeans and the divine partnership for their behalf on a day named after casting lots. Sway.